Texas might finally be able to have a primary election on May 29 under an interim map of congressional districts that was released today by a panel of federal judges in San Antonio. Burleson Heights’ current congressional district, District 25, has been through several rounds of redistricting attempts in the past nine months.

Under the interim map, Burleson Heights and most of the Burleson-Parker neighborhood are now in District 21, the district of San Antonio Republican Rep. Lamar Smith. Previously, our congressman has been Austin Democrat Rep. Lloyd Doggett.

Doggett has announced that rather than remain in District 25, he will file to run in the newly created District 35, according to the Texas Tribune. In the primary, Doggett might run against at least one candidate from San Antonio, where the district is based, according to the Statesman.

Designed to be a majority-minority district, 35 is an oddly shaped district that extends from Southeast Austin to San Antonio. But in our part of town, it is District 21 that is oddly shaped.

District 21 extends from Austin to San Antonio and out west to seven Hill Country counties. Only two small sections of District 21 extend east of I-35: in the East Riverside/Ben White area and in the Buda/Bluff Springs area. Apparently the judicial panel thinks our neighborhood has more in common with the fine people of Blanco, Fredericksburg, Kerrville, Boerne and the Lost Maples area than with our neighbors on the other side of Riverside Drive.

The new district, 35, is appropriately named because much of it is a skinny strip that hugs Interstate 35 through five counties. It widens as it nears Austin, and includes most of South Austin east of Manchaca Road, all of Montopolis and most of southeastern Travis County. But in our neighborhoods, District 35 will encompass only a small area east of Parker Lane and west of Catalina Drive and Burleson Road.

Like the redistricting map drawn by the Texas Legislature last year, this plan still splits heavily Democratic Travis County into five districts, three of which are seats held by Republicans, one of which will be vacated by Doggett, and one of which is new. The five districts extend from Austin to San Antonio, Houston, Waco and — in the case of our previous district, 25 — near Fort Worth. It is possible that Austin could end up with no Austin-based congressional representatives.

More than half of the state’s population growth in the past decade has been among Hispanics, and previous plans were challenged for diluting minority votes. The judges’ panel that redrew the district lines had proposed a plan that addressed those concerns, but also would have created a smaller Republican majority in the Texas Legislature and U.S. House. The U.S. Supreme Court overturned that plan in January, saying that the panel’s plan must more closely resemble the Legislature’s original plan. Under the current plan, our growing state will receive four new congressional seats, with two seats that offer a better opportunity for minority representation.

To see the interim map, go to the state’s district viewer. 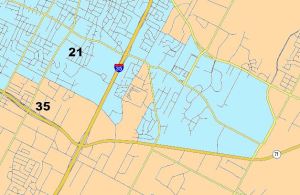 In our neighborhoods, Parker Lane, Catalina Drive and Burleson Road are the dividing lines between districts 21 and 35. (Click to enlarge.)

C. Forrest is a longtime resident of Burleson Heights.
View all posts by burlyheights →
This entry was posted in Politics. Bookmark the permalink.