Westbound Oltorf will be closed July 21-28

A construction project will close a portion of Oltorf Street to westbound traffic for one week beginning on Saturday.

From July 21-28, all westbound lanes of Oltorf will be closed between Interstate 35 and Congress Avenue, and only one eastbound lane will be open.

Traffic is being detoured onto Woodward Street.

The project is designed to replace water and sewer lines along Oltorf and install a stormwater drainage system near Blunn Creek. It began in May 2011 and was expected to end in July 2012, but has now been extended until early 2013 in order to make improvements to Blunn Creek and install another storm drain line, according to an announcement from the reconstruction team. Most of the work is expected to be complete in winter 2012.

Learn more from an Austin American-Statesman article by Ben Wear. 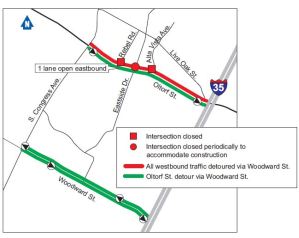 Westbound Oltorf Street will be closed July 21-28. Image from City of Austin. (Click to enlarge.)

C. Forrest is a longtime resident of Burleson Heights.
View all posts by burlyheights →
This entry was posted in City projects, Construction, Traffic, Transportation. Bookmark the permalink.