Posted on September 5, 2012 by burlyheights

A large street/drainage/water project that wrapped up last year in Burleson Heights is nearing the end of its warranty period. The contractor is still responsible for past damage to private property or flaws that become evident until Sept. 17. 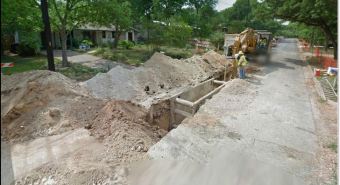 The cameras of Google StreetView captured trenching along Princeton Drive in 2011. (Click to enlarge.)

The project manager in the city’s Public Works Department who oversaw the project has retired, and the project is now managed by Lisa Whitworth. She says that a city inspector and the contractor will walk the project at the end of the warranty and look for problems such as buckling in the asphalt, pieces of pavement coming up and settling around trenchlines.

City staff are investigating why a new road surface that was designed to last 20 years is cracking and settling in several places in Burleson Heights. (Click to enlarge.)

Alligator cracking, caused by expansion and contraction of the asphalt over our clay soils, has created openings in the asphalt and will need to be sealed with tar to prevent water from disturbing the subsurface of the streets. Much has been sealed over the past year already, but if you see more alligator cracking or more serious problems described above, you only have one week to report it.

Contact the city’s and contractor’s project managers to report problems:

C. Forrest is a longtime resident of Burleson Heights.
View all posts by burlyheights →
This entry was posted in City projects, Construction. Bookmark the permalink.