Posted on September 12, 2012 by burlyheights

The request to gate Carlson Drive is still active, and the owners and developers of Edgewick condominiums have been working with the staff of the city’s Planning and Development Review Department to arrive at a viable solution.

To recap, Carlson Drive is a private road that belongs to Edgewick homeowners and Shire’s Court, Edgewick’s developers. Before any homes were built, Shire’s Court granted an easement to the city that allows the public to use the road, so in order to gate the road and deny access to the public, an amendment to the original restrictive covenant must be approved by the Planning Commission and City Council. 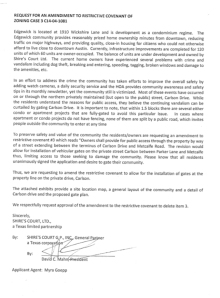 The developers and condo owners in the Edgewick community filed a request to gate Carlson Drive in January, claiming that crime in the community is linked to public users on the road.  (Click to enlarge.)

The Planning Commission makes its decision independently, but takes the recommendation of city staff into consideration. Staff does not recommend gating, but because the road’s owners strongly support gates, the Planning and Development Review Department has been working with them to come up with some compromise they would be able to recommend. Several hearings before the Planning Commission have been postponed until they can arrive at a solution. The next is tentatively scheduled for October.

Owners and city staff are looking at two options: Gating Carlson during limited hours to allow some public use of the private road, or making the road public and leaving it ungated.

Public streets belong to the city and must be built to certain standards. Heavy emergency vehicles need pavement of a certain strength or a traffic circle of a certain circumference, for example. Determining whether Carlson could be made public would require testing, at Edgewick’s expense. The unfinished community’s small number of owners would have to consider the cost of testing vs. the cost of continuing to maintain a well-used private road.

Edgewick and the city are also looking at potential terms for gating the road, such as what hours it would be open and who would have access.

Edgewick residents are aware that Carlson Drive is the safest route to Linder Elementary for children coming from Parker Lane, but they do not want other public users to have access to Carlson. Right now, Edgewick is proposing leaving the gates open for school kids for the minimum time possible.

What gating would mean

Blocking Carlson Drive to the public, even during evenings, weekends, holidays and summers, would affect emergency services, public transportation and the area’s residents and visitors.

How to learn more

What you can do

Though the city and the school district are not receptive to the idea of gating Carlson, dozens of homeowners have submitted signed statements supporting the amendment. However, citizens outside Edgewick have mostly contacted the city by phone. In order to weigh the decision, the Planning Commission needs written statements.

Indicate whether you support or oppose gating Carlson by sending a statement to the Planning Commission in care of the city’s case manager, Wendy Rhoades, Wendy.Rhoades@austintexas.gov. In the subject line, mention Edgewick, Carlson Drive or Shire’s Court, and in the body, include the case number, C14-04-0181.SH(RCA). Also include your name and, preferably, your address.

This is your neighborhood blog, and we want to know how you feel about this and other issues. You can post a comment below.

UPDATE: Six months after Edgewick condominiums managers and residents asked the city to gate Carlson Drive, they requested a permanent postponement to the case. City Council granted the postponement in December 2012, and the road remained open to public users. In February 2013, Edgewick began installing traffic-calming devices such as medians to narrow the lanes and slow vehicles. You can read the city’s notes about the case online.

C. Forrest is a longtime resident of Burleson Heights.
View all posts by burlyheights →
This entry was posted in Development, Police, Safety, Schools, Security, Traffic, Transportation. Bookmark the permalink.