Help turn your neighborhood into a fiberhood

Google Inc. announced today that Austin will be the next city in the U.S. to get its ultra-fast broadband network, Google Fiber. 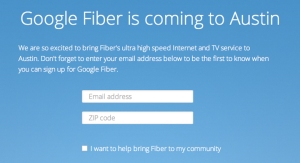 You can give your neighborhood a better chance of becoming a “fiberhood” by entering your ZIP code at https://fiber.google.com/cities/austin/.

The company will invest in its new “fiberhoods” in the areas with the greatest demand, so to bring the fiber-optic infrastructure to your neighborhood, enter your ZIP code and your e-mail address at Google Fiber’s Austin site.

And just how fast is ultra-fast? It’s 1 gigabit per second, or about 100 times faster than the typical Internet connection. That would mean speedy data downloads, smooth streaming for HD movies — and a strong incentive to improve the networks and service offered by competing Austin-area providers Time Warner Cable, AT&T and Grande Communications. Gigabit subscribers also get 1 terabyte of free online data storage.

Google has yet to announce pricing for Austin, but in the Kansas City pilot program, monthly rates are $70 for Gigabit (broadband Internet) and $120 for Gigabit + TV. A less expensive option is Internet service at 5 megabits per second, provided free for seven years after a one-time $300 fee — or the equivalent of $3.57 per month.

Service in the first fiberhoods should begin starting in mid-2014. To learn more, see the Austin American-Statesman’s coverage of today’s announcement, FAQs and the response from other service providers.

Update: Competition from Google Fiber is already driving improvements in communication and cable services in Austin. Time Warner Cable announced that it will introduce free Wi-Fi hot spots in Austin, and AT&T has said it will provide a similar 1-gigabit fiber-optic network if demand  is high enough.

C. Forrest is a longtime resident of Burleson Heights.
View all posts by burlyheights →
This entry was posted in Technology. Bookmark the permalink.