Google Inc. announced this week that it will start signing up Austin customers for its ultra-fast broadband service in December. A map of  the first service area includes the Burleson Heights and Burleson-Parker neighborhoods. 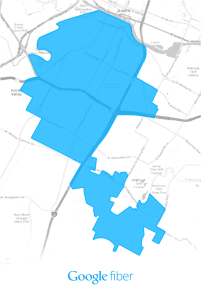 Google Inc. released a map this week of its first Google Fiber service area, which will start accepting signups in December. (Click to enlarge.)

The 1-gigabit Google Fiber service would be about 100 times faster than the typical Internet connection.

Google has not announced pricing for Austin, but in Kansas City, monthly rates are $70 for Gigabit (broadband Internet) and $120 for Gigabit + TV. A less expensive option there is Internet service at 5 megabits per second, provided free for seven years after a one-time $300 fee — or the equivalent of $3.57 per month. Google’s Mark Strama told the Austin American-Statesman that a similar option would be available in Austin, with the $300 fee broken into payments of $25 a month.

In its other markets, the service includes a terabyte of Google Cloud storage, and the $120 service covers one TV ($5 for each additional set), a DVR that can record eight shows at once, a home Wi-Fi network, and more than 150 channels. Premium movie channel packages are available for $10-$40.

When Google first announced its Austin plans in spring 2013, the company said that it would bring the service first to neighborhoods — or “Fiberhoods” — with the greatest demand, and encouraged interested Austinites to register online. According to the Oct. 15 Statesman story, Strama said that each Fiberhood will also have to reach a threshold of a certain number of subscribers before Google will hook up the service there.

To register your interest with the company, you can enter your street address at the Google Fiber Austin page and request e-mail updates. Learn more about Google Fiber online, and see an interactive map of Austin apartments that have requested Google Fiber.

C. Forrest is a longtime resident of Burleson Heights.
View all posts by burlyheights →
This entry was posted in Entertainment, Media, Technology. Bookmark the permalink.