Clay Harris and Neil Kopper of the City of Austin Public Works Department talked with Burleson-area residents on Aug. 14 about upcoming projects to improve mobility for cars, bicycles and pedestrians on Todd Lane and Burleson Road.

Harris, the project manager for the Todd Lane project, said the city is taking a multi-modal approach to transportation on the road, which will soon be rebuilt to better serve many kinds of users — and more of them. Currently about 3,000-4,000 vehicles a day pass through the intersection of Todd Lane/St. Elmo/Pleasant Valley Road, he said, but that number is expected to reach 15,000-20,000 vehicles a day by 2035. The project is designed to conform with the Capital Area Metropolitan Planning Organization (CAMPO) 2035 Regional Transportation Plan. 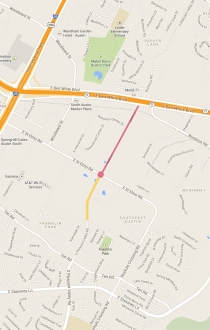 “About 60,000 people are moving to Central Texas every year,” Harris said. “We’re doing our best to handle that flow, and look at it not just for vehicles, but also for pedestrians and bicycles.”

Once complete, Todd Lane will have three vehicle lanes, including a center turn lane, plus 8-foot-wide bicycle lanes and 10-foot-wide sidewalks on each side. The number of bus stops will increase from two to four, with crosswalks and overhead lights known as hybrid beacons that will alert drivers by flashing when a pedestrian needs to cross the street. There also will be four crosswalks at a roundabout at St. Elmo Road, which will be built during the last phase of the project. Speed limits will be 25 mph in the roundabout, 35 mph on Todd Lane, and 45 mph on St. Elmo Road.

A new section of South Pleasant Valley Road recently opened on the south side of the intersection, greatly improving connectivity in Southeast Austin, but one result will be more cars on Todd Lane and Burleson Road past our neighborhoods.

“It will increase traffic flow. That’s the bottom line,” Harris told residents. “There aren’t many north-south corridors in this area.”

The city has chosen Chasco Constructors as the contractor for the Todd Lane project and is in the process of moving utilities to make way for the wider road. Construction is expected to begin in September and will last about a year and a half.

Learn more about the upcoming improvements in the Aug. 8 blog post.

Kopper, an engineering associate with the city’s Neighborhood Connectivity Division, told residents that Burleson Road will be restriped soon as part of a resurfacing project — gaining more parking in the process. 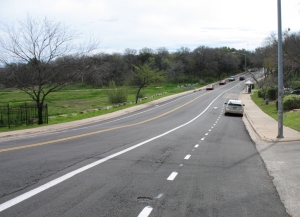 After Burleson Road is restriped, four residential blocks will resemble nearby Parker Lane, which has one lane for parallel parking, plus two bike lanes. Click to enlarge.

The new configuration will be similar to Parker Lane, which was restriped in 2012 to have parallel parking on one side of the street (read the Feb. 18, 2012, blog post).

Vehicle lanes are typically 10-12 feet wide, Kopper said, but Burleson Road is a whopping 44 feet wide, and has 17-foot-wide car lanes and 5-foot wide bike lanes. The new configuration will narrow the car lanes to an average width, and will create safer, wider bike lanes and a lane for parallel parking along the west side of Burleson between Douglas Street and Santa Monica Drive. Parking will still be prohibited on most of Burleson, which will feature “buffered bike lanes” that are separated from the car lanes by a 2-foot-wide painted buffer.

In addition to parking, a benefit to the restriping could be safer speeds. How drivers perceive a roadway affects how fast they drive, Kopper said, and Burleson’s unusually wide lanes likely contribute to speeding.

The city might be able to reduce speeds even more at major bike and pedestrian crossings — such as between Santa Monica and Terrilance, where a pocket park meets a future section of the Country Club Creek Trail — by installing traffic calming devices such as concrete median islands. Kopper said residents can apply for traffic calming through the city’s Local Area Traffic Management program.

Resurfacing on Burleson will probably take about two days, and restriping, one day. The project is expected to start in early 2014.

NOTE: All of Burleson Road is still a no-parking zone. Until restriping allows parking in limited areas, cars that parallel-park anywhere along Burleson or on sidewalks can be ticketed. 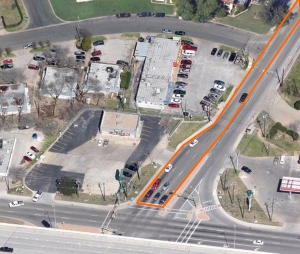 The layout of the southbound lanes of Burleson Road (orange) doesn’t match the traffic pattern at the Ben White intersection.  Click to enlarge. (Google Maps)

Residents asked about the southbound lanes at Burleson Road and Ben White Boulevard, where current lane assignments cause daily traffic snarls. The intersection once had a dedicated right-turn lane, but now has two lanes for cars turning left (east) and only one lane shared by cars going straight (south) or right (west). The result is that cars stack up in the right lane, often blocking a driveway and a cross street, while the left two lanes are very lightly used. Drivers who want to head west on Ben White often avoid the frustration by taking other routes, adding traffic to smaller residential streets or cutting through parking lots.

Harris recommended contacting the Texas Department of Transportation, which has more authority over the intersection than the City of Austin does. 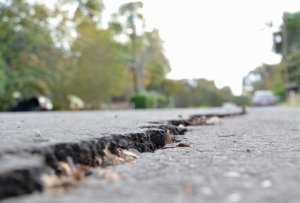 The city is studying why new roads that were designed to last 20 years are cracking and settling, such as Ware Road. Cracks formed in Burleson Heights less than a year after the streets were finished. Click to enlarge.

Neighbors also raised concerns about cracking and settling on streets that were rebuilt in Burleson Heights two years ago. (Read a Sept. 5, 2012, blog post.) The problem is happening throughout Central Texas, Harris said, and the city has been working with officials in several counties to find a solution. A study is expected to be finished in September, and any repair work will be done by Street and Bridge Operations.

Residents also complained about the poor quality of fill dirt used in the project. When the construction contractor replaced curbs, native soil was removed from yards and replaced with rocky soil. New sod that covered the fill dirt quickly died in 2011’s record drought, and much soil washed away, leaving behind limestone rubble. Harris said he would pass along the concerns in the Public Works Department.

C. Forrest is a longtime resident of Burleson Heights.
View all posts by burlyheights →
This entry was posted in City projects, Construction, Cycling, Meetings, Safety, Traffic, Transportation. Bookmark the permalink.